Biryani is now as ubiquitous as Tandoori Chicken and Chicken Tikka Masala at NYC Indian restaurants. 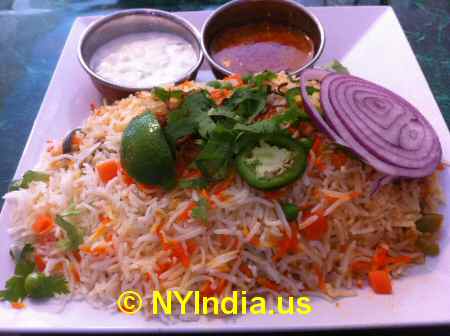 Biryani is a flavor-filled rice dish prepared by cooking Basmati Rice with Cinnamon, Clove, Cardamom, Ginger, Garlic and a bunch of other Indian spices.

Biryani can be vegetarian or include chicken, goat, lamb or shrimp.

Most Indian restaurants in Manhattan, Queens, Hicksville, Jamaica, and Brooklyn offer Biryani as part of their menu.

While tons of NYC Indian restaurants offer Biryani, there are a few dedicated Biryani restaurants and food carts in Midtown West, Jackson Heights, Flushing and Hicksville. 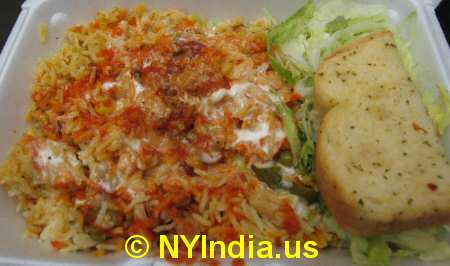 Hyderabad Dum Biryani is offered by restaurants owned/run by Telugu speaking people from the South Indian states of Andhra Pradesh and Telangana.

Hyderabad Dum Biryani is usually spicier and priced between $8.99 to 15.99 depending on the variety.