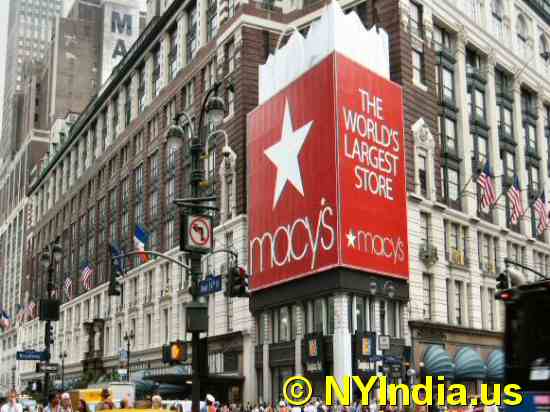 The Macy's store moved to 34th Street and Herald Square in 1902.

Macy's store (as seen in the above picture) is nine stories high and has 33 elevators and four wooden escalators.

In 1924, Macy's Herald Square was declared the world's largest store.

The store has 800 locations across America.

A few years back, Macy's faced charges from the New York state of racial profiling and illegal handcuffing of customers.

Blacks and Latino shoppers at Macy's stores were targeted by Macy's private police.

The company settled the case by paying a nominal fine of $600,000 and promised to implement changes in its security policies.

It's not known if Macy's has stopped its harsh racial profiling of Blacks and Latinos.

Macy's is famous for the annual Thanksgiving Day Parade in New York City it sponsors.

By the way, the Chinatown bus for Wilmington (DE) and Baltimore stops right outside Macy's on W34th St. If you see a large crowd in the evenings you can be sure it's mostly comprised of people waiting for the Chinatown bus to arrive.
Other Pictures of New York