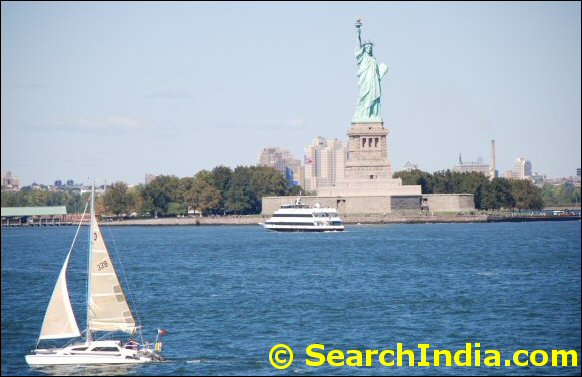 Statue of Liberty, New York City
Located on Liberty Island (about 25 minutes from Manhattan by ferry), the Statue of Liberty is a gift from the people of France to the Americans.

In a way, it was a joint effort with the French designing and building the statue and Americans building the pedestal.

Sculptor Frederic Auguste Bartholdi designed the world famous sculpture while Alexandre Gustave Eiffel is credited with design of the massive iron pylon and secondary skeletal framework. Though slated to be completed in 1876 to commemorate the American Declaration of Independence, the Statue of Liberty was delayed by 10 years due to lack of funds.

The Statue was completed in July 1884 and shipped to United States in the French frigate "Isere". Shipped in 350 pieces and 214 crates, the Statue was re-assembled on the new granite pedestal inside the courtyard of the star shaped walls of Fort Wood of Bedloe's Island and dedicated on October 28, 1886 by President Grover Cleveland.

The crown of the statue has 25 windows symbolizing the gemstones found on the earth.

The seven rays of the Statue's crown represent the seven seas and continents of the world. The tablet which the Statue holds in her left hand reads (in Roman numerals) "July 4th, 1776."


Other Pictures of New York