Alas, the Jackson Heights branch turned out to be the bastard child of the Indian Taj restaurant group that operates multiple restaurants in NYC. For much of what we tasted at Indian Taj on 74th St in Jackson Heights is definitely not designed for biped, i.e. human consumption. What we encountered at Indian Taj was one brutal, furious, merciless assault after another on our taste buds. Be it Vegetarian or Chicken items, Indian Taj's kitchen lobbed one missile after another, lacerating not merely our palate but making sharp gashes into our tender soul at the thought that one Indian could be so perverse, so cruel, so heartless, so maleficent toward another.

Can some sane individual explain to us how Chicken Chilli can be anything but spicy. You see, the beastly monsters lurking inside Indian Taj's kitchen decided that Chicken Chilli must be a spice-neutered, emasculated travesty. Not in the least spicy, the blandness of Chicken Chilli brought tears to our eyes over the absence of any heat from the chillies and spices. 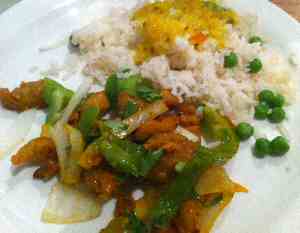 Cold, Spiceless Chilli Chicken
With their effete palates, a lot of Americans may not have the testicular fortitude for spicy Indian food. But we certainly have the cojones for spicy food. Bring it on. Adding insult to injury, the Chicken Chilli was cold, just minutes after the restaurant opened. 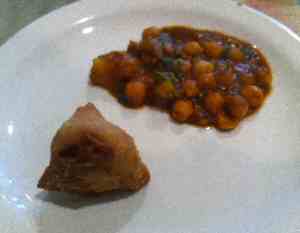 Tasteless Samosa (left)
The medium sized Vegetable Samosa was evenly fried and that's all we can say in its favor. The Potato filling inside, which is the main allure of a Samosa, was horridly tasteless. Worse than the bland mashed Potatoes that an American Grocery store deli peddles. By God, if you can't get the Samosa right you really have no place in an Indian kitchen. A Samosa is the equivalent of toasting bread. How difficult can it be to get a Samosa right! 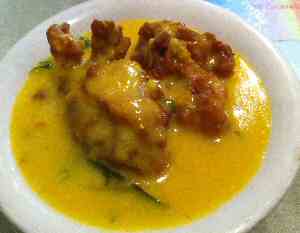 Kadi Pakora - Mucho Turmeric
Kadi Pakora with a surfeit of Turmeric Powder did not provide us any joy of eating this famed Punjabi delicacy. Pakoras in Kadi Pakora were so tasteless that we cringed after one bite.

Tasteless Yellow Dal (top),
Palak Paneer and Navratan Korma (bottom left)
Yellow Dal was hot temperature wise and that's it. Devoid of any flavor, Indian Taj's Yellow Dal in our opinion is not fit for any living creature's consumption leave alone paying diners. Where do crappy restaurants like Indian Taj pick up their clueless kitchen staff from? Are they Indians, Amigos or Aliens from a distant galaxy? We wanna know. Mercifully, Palak Paneer did not have the usual raw taste that you encounter at so many Indian restaurants in the NY/NJ area. But it was hopelessly flavorless and it felt like we were eating finely boiled chopped Spinach with fried Paneer than the North Indian creamy delicacy Palak Paneer. Navratan Korma was creamy but dominated by Chickpeas making us wonder why Indian Taj had two Chickpeas items on the lunch buffet. Navratan Korma is usually prepared with a combination of nine vegetables including some nuts. Compounding our irritation, the Indian Taj version of Navratan Korma was far too sweetish. Naan Bread came hot to the table. Usually it's served along with the buffet and not at the table. Since it was not ready, the waiter brought it to our table on his way to placing the bread on the buffet station. 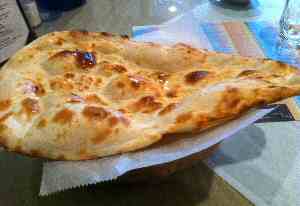 Crispy Naan Bread
No, even the hot Naan bread did not give any relief. For it was too crisp. Plain Rice with a sprinkling of Green Peas was alright. At some Indian restaurants, even Plain White Rice is a disaster. 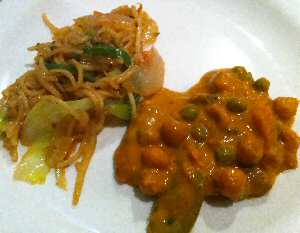 All the chicken items we tried at Indian Taj turned out to be great disappointments. Tandoori Chicken had a slight smoky flavor but suffered from poor marination. Chicken Makhani didn't endear itself to us either. 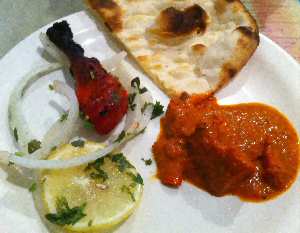 Tandoori Chicken (L) & Chicken Makhani
Usually Chicken Makhani is a creamy, flavorful delight when prepared by a competent Chef. But not at Indian Taj in Jackson Heights folks.

Phase three of Indian Taj's assault on our palates came in the form of the most common Indian dessert, the Gulab Jamun. 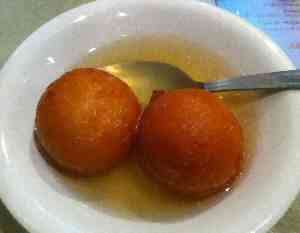 Sure the Indian Taj waiter greeted us with a smile and we were shown to a table quickly. But though the restaurant was near empty, the used plates were allowed to pile-up, our water glasses were not filled and we were not alerted when "Maggi" Vegetable Noodles were added to the Buffet Table in the middle of our meal. Also, Naan container at the buffet tablet ran empty forcing one of the other diners to mention it to the wait-staff. For the most part, the staff was huddled at the back blah-blah-blahing as Indians are wont to do at most restaurants at the first opportunity.

Folks, starve if you must but avoid Indian Taj on 74th St in Jackson Heights, New York. For, much of the food served at Indian Taj's lunch buffet is a tasteless and flavorless travesty. So unlike the fine food at its Greenwich Village sibling. Hesitate not to show this bastard child your middle finger with gusto. As for us, we don't plan on returning to Indian Taj Jackson Heights anytime soon. - © NYIndia.us