There has been so much hype about Tangra Masala (Grand Ave, Elmhurst) in Queen's that we had to see for ourselves what the fuss was all about.

Alas, the din of the culinary bubble-heads amounts to nothing.

After a regrettable meal at Tangra Masala, we concluded that this almost a hole-in-the-wall Elmhurst restaurant is an ugly stain on Indian Chinese cuisine.

In several decades of eating Chilli Chicken, our taste-buds have not made contact with a version so awful. 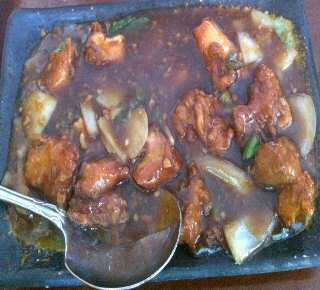 Chilli Chicken - A Travesty at Tangra Masala
Although we'd had specified Indian-style spicy when we ordered, what landed on our table was a spiceless abomination with a few forlorn looking green chilli pieces floating in the gravy.

Such gross incompetence from the kitchen of Tangra Masala left us completely aghast.

Disappointed with Tangra Masala's Chilli Chicken, we quickly fell upon the Eggplant Manchurian.

We heaped some of the Eggplant Manchurian upon the White Rice.

All hopes that the Eggplant Manchurian would be a treat were dispelled after just the first spoonful. 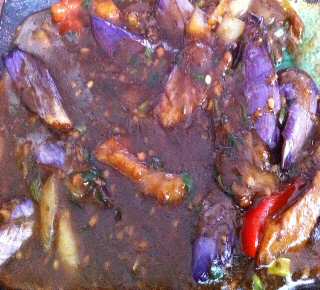 Eggplant Manchurian - Disappointing
Alas, the fiends in Tangra Masala's kitchen had played another cruel trick on us.

This too was a spiceless travesty.

What in the hell is wrong with Tangra Masala!

Singapore Vegetable noodles salvaged our meal from turning into a complete disaster.

The thin rice noodle with onion, spring onion, green pepper and red pepper was tasty but the serving size was tiny.

Hot and Sour Soup was alright.

Folks, overall the food at Tangra Masala in Elmhurst, NYC does not live up to the hype.

Service at Tangra Masala is nothing to write home about.

Although we were the only dine-in customers for the duration of our meal, the two Nepali waiters did nothing to make us feel special.

The taller of the two fellas removed our Eggplant Manchurian without caring to check with us.

DesiJacksonHeights.com does not recommend Tangra Masala.