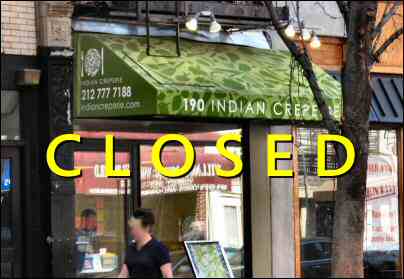 If there's one thing our South Indian taste buds constantly hanker for, it's the South Indian rice crepe Masala Dosa.

The mere mention of Dosa has us drooling.

So it's no surprise that our legs automatically led us to Indian Creperie on Bleecker St the other day.

You see, we were near the intersection of Bleecker St and MacDougal St when our eyes fell upon an attractive green signboard that read Indian Creperie.

When we walked into Indian Creperie around 2:30 pm, the restaurant was empty with just one diner digging into his Medhu Vada.

We were greeted by a White gal and shown to a table.

It has limited seating on the right side and the left side has MTR brand Chutney Powder, Sambar Powder and other Indian spice mix packets on display.

The cash counter is at the far end and the kitchen behind it.

The tables were clean and interiors pleasant.

We picked up a menu card from the cash counter and quickly placed our order for Idli Vada Combo and Masala Dosa.

As we were halfway through with the Idli-Vada combo, Masala Dosa landed on the table with the yummy Ginger and Coconut Chutneys and that delicious Drumstick Sambar on the side.

Masala Dosa was crisp, hot with a nice freshly prepared texture and included a large filling of Potato Curry.

Potato filling was flavorful and gave no room for any complaint.

Content with our pleasant Masala Dosa, Medhu Vada adventure, we paid our bill and were preparing to leave the restaurant.

As we were collecting our stuff, we spotted the Chef Suresh Gounder from Salem district of Tamil Nadu.

Chef Suresh Gounder was happy to know about our Tamil roots and quickly offered us a complimentary Gulab Jamun dessert.

With a weakness for anything sweet, we easily succumbed to his offer.

Also, the Gulab Jamun looked so attractive in the tiny plastic container and we just could not say no despite our calorie concerns.

Gulab Jamun was cold, a little hard and the syrup a wee bit high on sugar.

But, hey, it's nice to get a free dessert.

The White gal at Indian Creperie was polite and promptly got us our food.

While we were happy to see a smiling waitress at an Indian restaurant we were puzzled that she never served us water or enquired whether we wanted anything to drink.

Notwithstanding our minor irritation about the sloppy service, we would recommend Indian Creperie on Bleecker St for all ye Masala Dosa and Medhu Vada aficionados. - © NYIndia.us